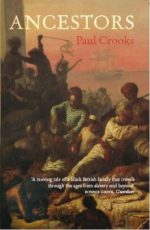 Paul Crooks returns to Bristol in June 2019 to speak about his amazing journey and how he traced his roots.

Paul pioneered tracing African-Caribbean ancestry when he became the first person of African Caribbean descent to trace two of his African ancestors enslaved on a sugar plantation in Jamaica. The Voice newspaper described him as Britain’s answer to “Alex Haley” when his epic novel Ancestors (Arcadia books) was published in 2002.

Paul is said to have spawned an industry in African and Caribbean ancestry when - in 2008 - he published his second book ‘A Tree Without Roots: The Guide to Tracing British, African, and Asian Caribbean Ancestry’.

Subsequent speaking engagements, television appearances (the first series of Who Do You Think You Are?) and national radio interviews led to more people from African Caribbean communities wanting to explore ancestry.

Paul returns to Bristol in June 2019 to speak about his amazing journey and how he traced his roots.

More details of how to register will soon to be announced. Sign-up for an update on this announcement and for up-coming here. You can book tickets directly from the Eventbrite calendar.